Over the last several years, I have dealt with thousands of sellers, thousands of buyers, created thousands of print and digital ads, created more than 20 auction catalogs and placed tens of thousands of ads on online marketplaces. Though all this, I frequently hear the same series of complaints:

“My car is amazing, documented, and should bring all the money. Why didn’t it sell/why isn’t my phone ringing?”

Nine times out of ten, I go back look at the ad and the reason becomes instantly clear: The pictures are HORRIBLE.

For me personally, my biggest pet peeve when browsing online or through a publication equates to low resolution pictures, shot from an ill-conceived angle of the car sitting in gross, brown snow. Just don’t do it. Sure, photos serve an informative purpose in classified ads, auction catalogs and on online forums, but what the best, most successful auction houses and retailers know, is that they also create mental ownership. Quality images that are aesthetically pleasing and elicit emotion, stir people and thus put them in a position where they see value. Additionally, how inclined are you to assume a car is well taken care of and well-maintained if it’s surrounded by semi frozen water and 2 inches of rock salt or gravel? That certainly does not inspire any confidence in me. I see this kind of image in an ad for a car like this and I immediately shake my head and pass it by. Word to the wise, take the pictures that you use to try and sell your specialty vehicles seriously. They’re the single most important piece of the equation. You’re not trying to sell your uncle’s 1995 Explorer here. You’re trying to sell a dream, so therefore inspire somebody. The rewards at the end of your sale will speak for themselves.

But what if you aren’t a photographer? Is all hope lost? Of course not. Obviously, there will always be a difference between the photos produced by a recognized, professional photographer with years of training, experience and tens of thousands of dollars in equipment and those shot by a seller with an iPhone in his or her driveway, but ultimately, automotive photography isn’t like separating adjoined triplets in a gas station bathroom with a pen knife. It’s really not that intimidating, time consuming or complicated.

Here’s a couple of simple steps to follow to insure you don’t cut your own foot off before you even take the first step: 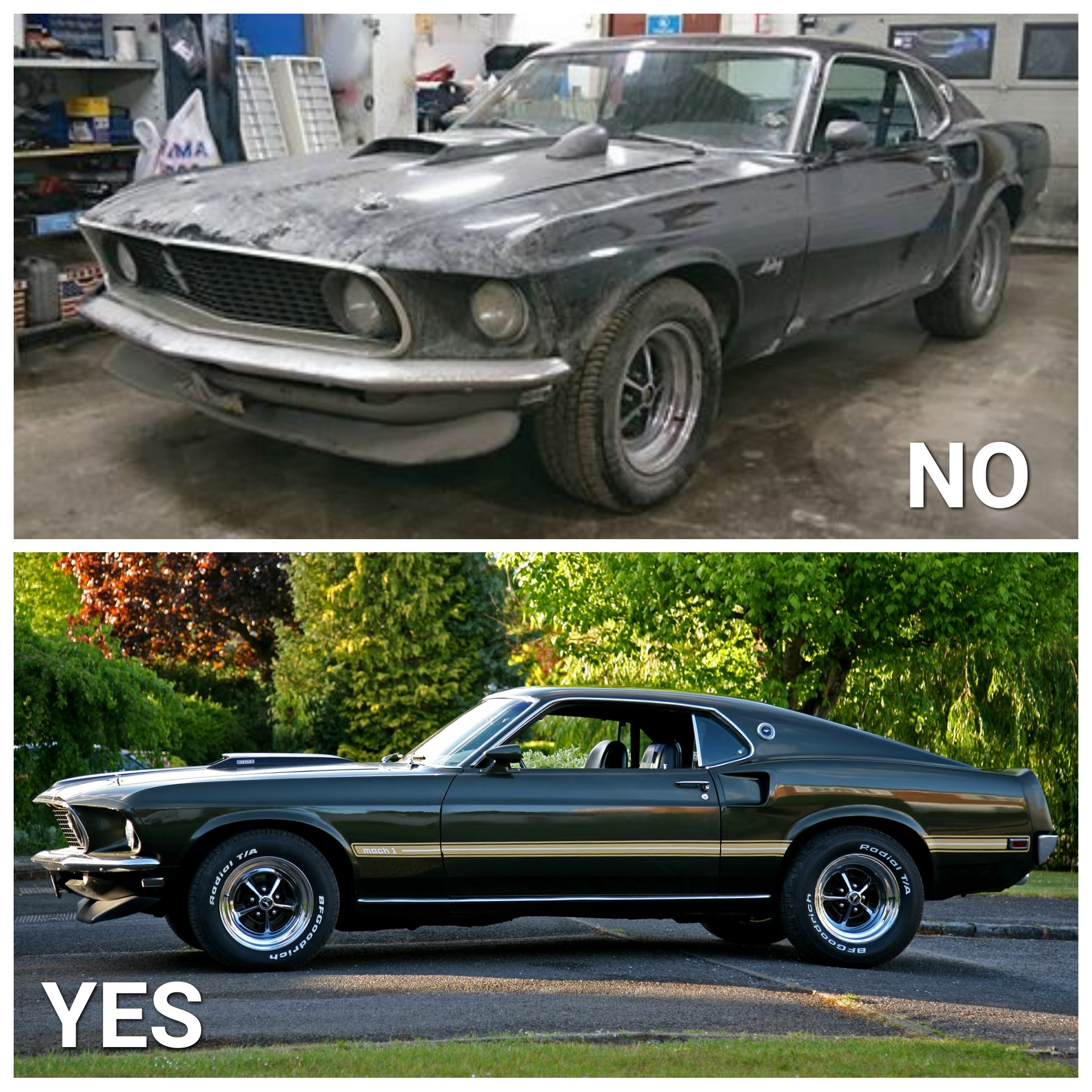 1. Be Conscious of the Condition of Your Offering

This should by no means be something worth mention, but sadly it is. The reality is, that unless your name is Peter Parker, spider webs, dried up flies and random hunks of biological debris are not going to increase the value of your collector car. Simply put, WASH YOUR CAR! This means, make sure the paint is as shiny as you can get it, your interior is at minimum, loosely detailed and your engine bay doesn’t look like a British Petroleum company retreat in the Gulf of Mexico. Although not as critical at picture time, also make sure to clean out your trunk. As a buyer, nothing makes a test drive more uncomfortable than finding a collection of 20-year-old Hustler magazines wrapped in a dusty old KISS t-shirt while you are checking for tin worms under the carpet in the back (this literally happened to me yesterday….and no, I’m definitely not buying the car). 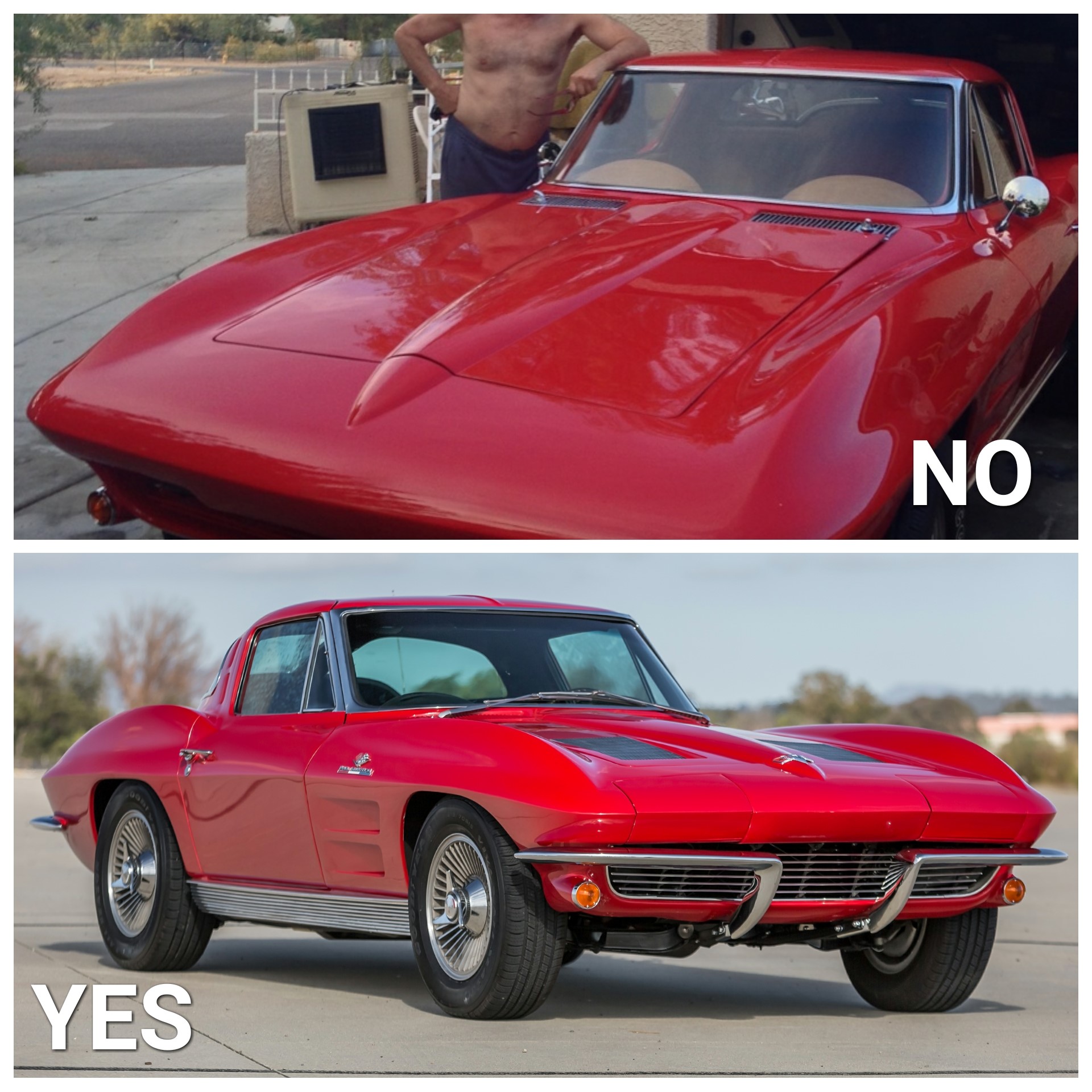 2. Be Aware of Your Surroundings

One of the most commonly overlooked elements in taking a quality picture of a collector or specialty automobile is the background. Sure, hyper complicated backgrounds, like a wall of vines, or a row of trees do look nice, but they also tend to cast of lot of less than desirable shadows and reflections. In a situation where your car may be included in any kind of extended marketing (like digital banners, catalogs or print ads), this may make your car unusable. The same can be said for grass. Grass reflects A LOT. Cars certainly look great near grass in photographs, but not on top of it. Its always best to stick to pavement or hard packed dirt. So, what if your car is a Concours winner? By all means, include photos of your car on the Concours lawn if applicable, but don’t use these as your main images. Especially, because it’s difficult to keep pictures like that clear of distracting background items like people and signs. With that said, make sure your pictures are free of things like garbage cans, your neighbors kid’s 1991 Honda and anything else that may be deemed distracting and/or undesirable. Additionally, for love of god, keep piles of unconscious homeless people (seen it), polarizing political lawn signs (seen it A LOT) and somebodies topless Grandmother standing in front of her trailer out of your pictures (wish I could unsee this – and to add insult to injury, it was on a $300,000 car). You may also want to avoid using that one picture of you holding a Budweiser and throwing up fake gang signs, standing next to your car in the parking lot of NASCAR. Although that may have been a meaningful experience to you, the car is what people are interested in. That should be the only thing potential buyers see. 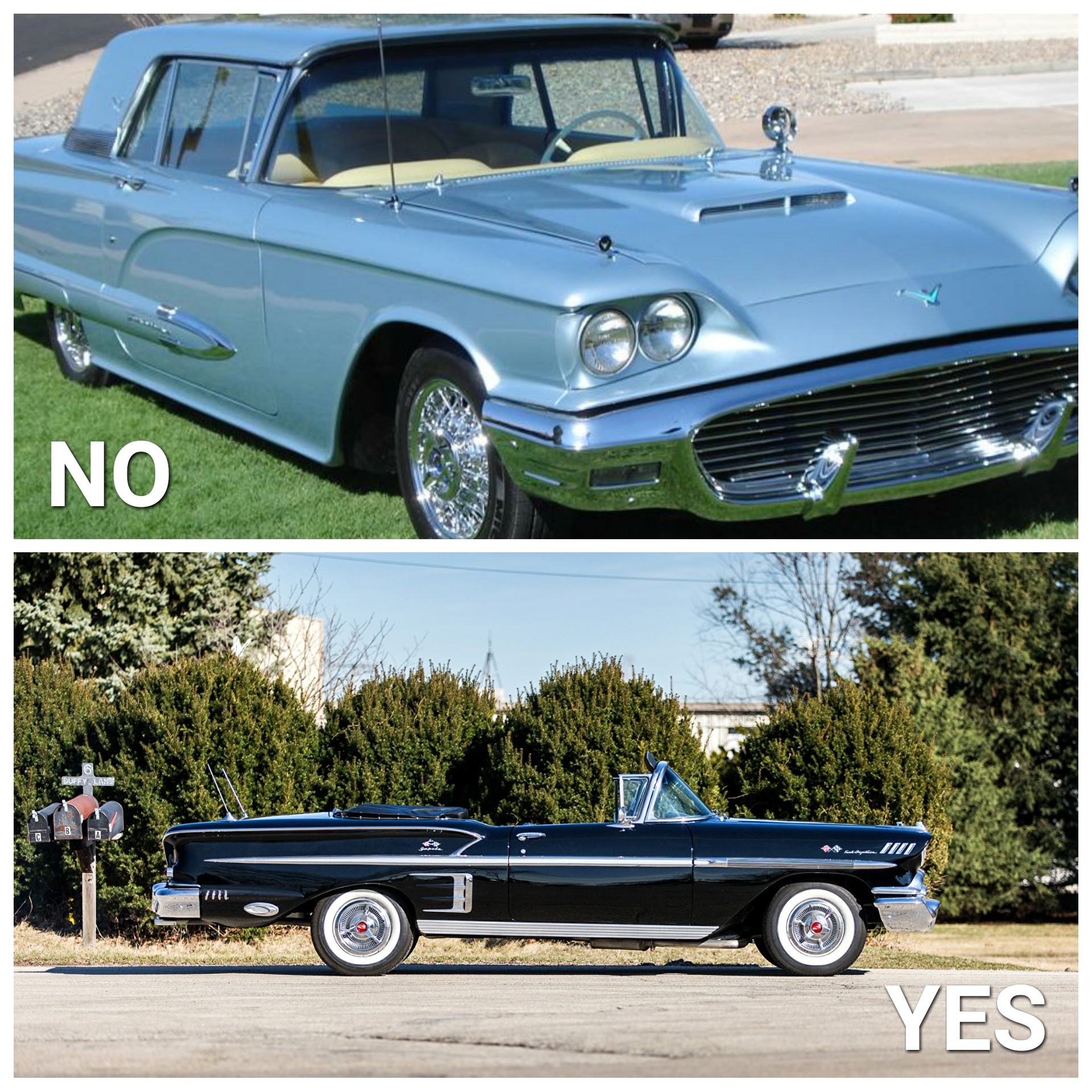 3. The Car, The Whole Car, and Nothing but The Car

This is another extremely common photography faux pas and I guarantee every single person reading this has seen it over and over again. For whatever reason, sellers of collector/specialty cars seem to have real difficulty getting the entire car in the shot. Now, don’t get me wrong. I’m all about sexy detail shots, but that’s not what I’m talking about here. I’m talking about the ads that have 14 pictures on them, with zero of them managing to get the car in the frame from bumper to bumper. For the sake of argument, I’m only speaking to exterior shots, as engine and interior shots can be successfully accomplished much more liberally.

Here’s the dirty half dozen that every car ad should ALWAYS have:

It’s critically important that all these shots are included, and all are complete. Another commonly overlooked item on this token, is space surrounding the car. Moral of the story? Leave some. Again, for whatever reason, every car guy/gal seems to want to put their car right up to the borders of every image. The actuality here, is that not every application will always be formatted the same way. This means that if you don’t leave room around your car in photographs, your car may be cut off in display ads, or catalogs, or worse, it may just be unusable. Always give your car a decent amount of room to breath in pictures and send high resolution pictures that can be brought in if required to create that border to border type hero shot you are ultimately trying to accomplish (more on this later……). 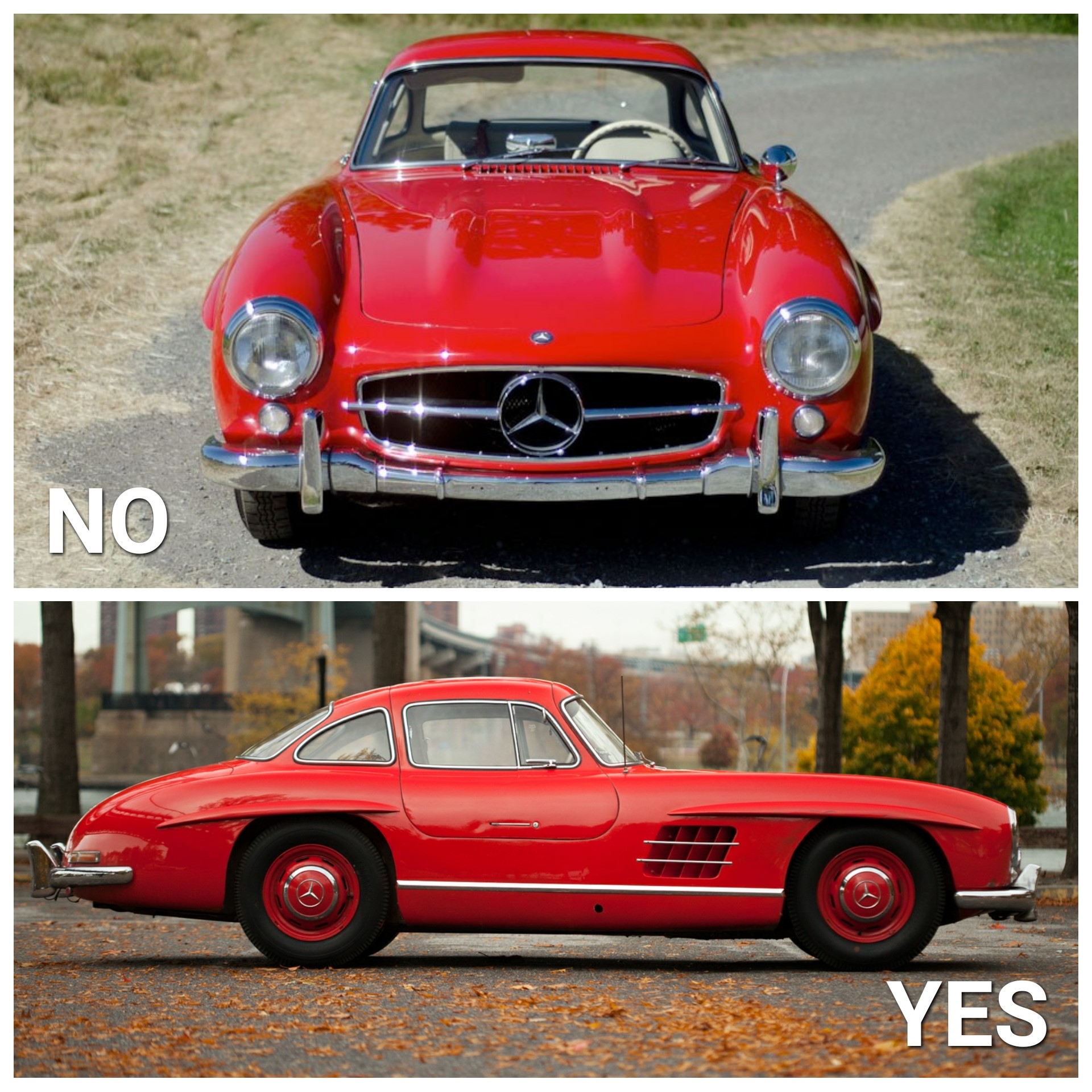 4. Don’t Get Spanked by Mother Nature

As previously indicated, mother nature definitely plays a role in producing quality photographs of your collector car. Obviously, you don’t want to shoot in sideways rain or a snowstorm (or anything that even looks like snow), but subtilties still exist – mainly the sun. As a rule of thumb, you always want to shoot with the sun behind you, but shooting in the middle of the day with it beating down on you somewhat makes this irrelevant. Time of day is REALLY important. The idea is to avoid glare and heavy shadowing. Your best bet is to shoot when the sun is most balanced and least extreme. This means that the ideal times are in the morning before the sun reaches its peak and then in the late evening when the sun begins to make its exit. Think between the hours of 7:30 AM and 9:00 AM and then again between approximately 5:00 PM and 6:00 PM. Of course, this depends on time of year and where you live or work, but these are good basic guidelines to work from. 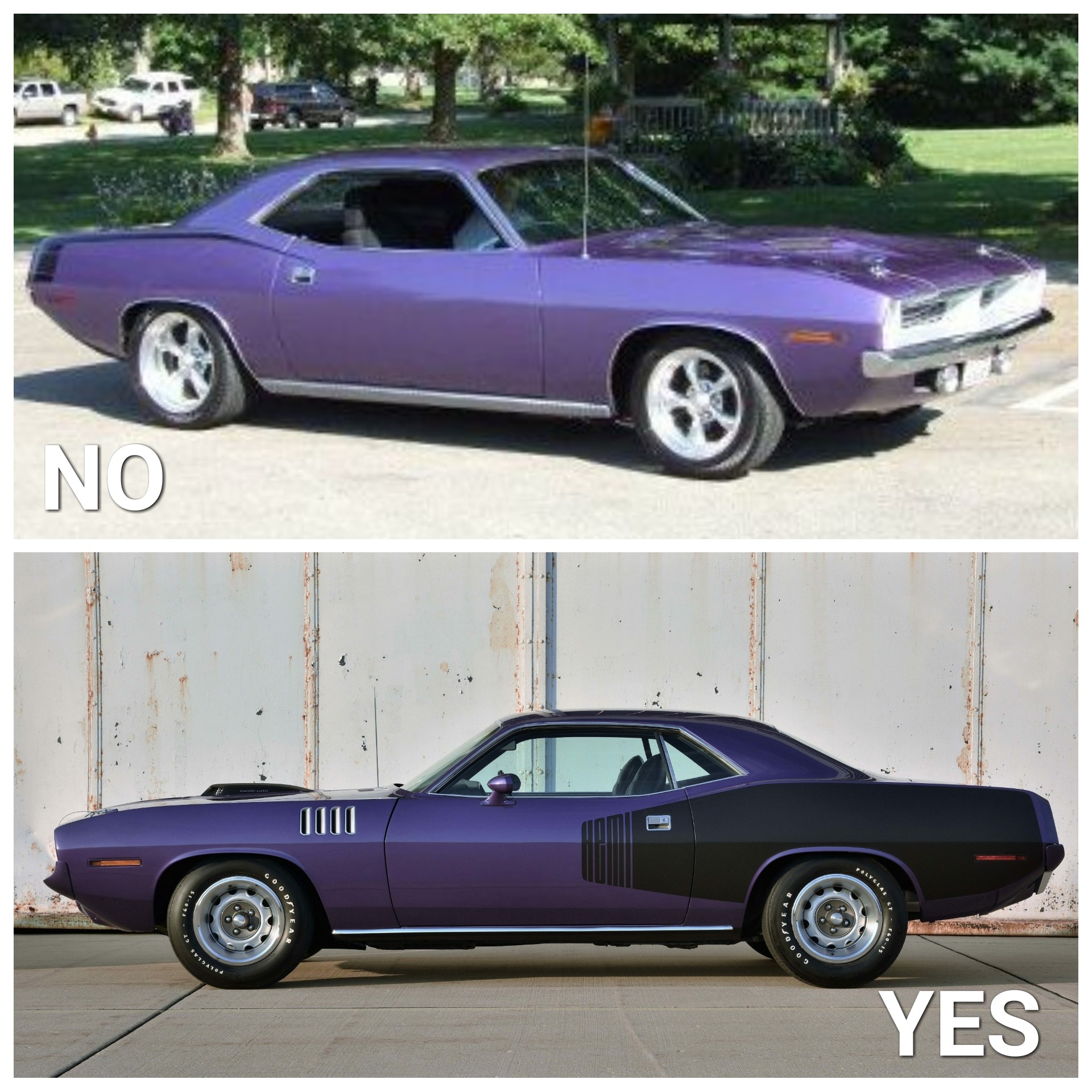 This one’s is easy. Don’t shoot low resolution photos…. period. A grainy, stretched out photo that is totally void of any discernable detail helps nobody. They fact of the matter is that you never want to try and present a collector automobile in a photo that’s less than 1200 pixels wide and less than 1.5 MB in total size. Many online listing services at this point won’t even except images smaller than this, so take the time and make sure you aren’t somehow compressing your photos or using a camera that isn’t up to snuff. You would think that in 2018, this wouldn’t be a thing, but it absolutely is. If your camera or cell phone is 48 years old and incapable of taking pictures, find somebody to help you. Virtually the entire rest of the world is up to speed on this, so it won’t be hard. Got something really special that may be worthy of a PR campaign? You are completely dead in the water without high resolution images.

SPECIAL NOTE FOR APPLE USERS: Beware of emailing the pictures you take with your Apple devices on your Apple devices. In shiny, happy iPhone world, where everything is smooth and pretty and basically nothing else matters, Apple email applications compress absolutely EVERYTHING, especially if you try and paste into the body of an email. This means that although you may take the biggest, best, most beautiful pictures ever, the ghost of Steve Jobs will step in and turn them into 143kb, unusable pieces of crap, just because he can. Try and find another way to send if you are an Apple person (I suggest Dropbox, Gmail or one of Apples third party applications). 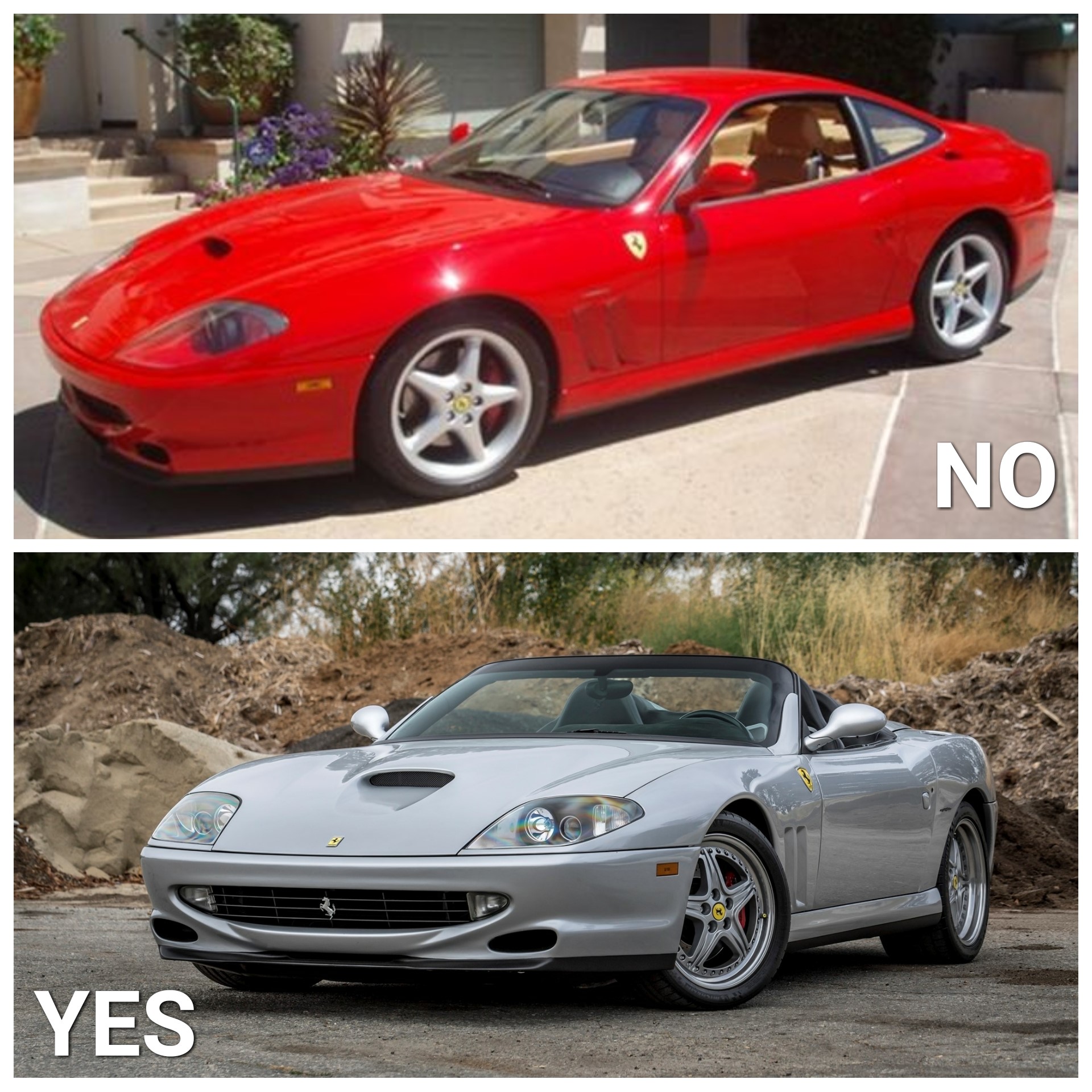 Although less important from an informative standpoint, the angles in which you shoot from are possibly the most high impact elements from an emotional standpoint. You want to create photos that are versatile, yet at the same time make your car look awesome. This is simply accomplished by shooting from the ground up (with your wheels pointed in the right direction!). Pseudo street level angles, especially on your front ¾, rear, ¾, profile and nose shots just all-around look so much better. If you look at any highly regarded professional (I suggest Patrick Ernzen from Desert Motors or Darin Schnabel from RM Auctions if you need examples here), they virtually always shoot from the ground up on their bread and butter pictures. Not only does it look WAY better than some half-cocked shot taken facing downward, from the center of your chest, but they are also dramatically more usable from an advertising standpoint. They simply sit in templates, banners and print FAR better this way. Take the time and concentrate on how the angles of your photos will be perceived. It really does matter.

Darin Roberge is President and CEO of Arizona based, Specialty Automotive firm Motorwerks Marketing. Darin has been named a Business Trendsetter by Arizona Foothills Magazine, is a two-time nominee to Phoenix Business Journal’s 40 Under 40 list and is one of Sports Car Market Magazine’s 40 Under 40 for 2017. Learn more at about Darin at MotorwerksMarketing.com