SEMA cars are polarizing beasts. By some, they are viewed as the ultimate statements of innovation and creativity. On the other hand, they are regarded as garish and semi offensive. The reality is, that SEMA cars are purpose built proclamations of ability. Exhibitors are limited by the constraints of a 10×10 or 20×20 piece of real estate and these cars have to be able to demonstrate everything that they are capable of therein. If you are a builder or manufacturer offering multiple products or services, you need to bring forth something that showcases all of this, to the highest degree in as many areas as possible, all within that allotted space. Of course, eye candy/attention getter elements additionally exist, but the standard is set and “keeping up with the Jones’s” comes into play for everyone else with a more limited purpose for appearing (think oil companies for example). Either way, these cars do have the tendency to throw taste out the window in favor of utility, but that’s what they are for. They have a job to do and they do it and regardless of how jumbled looking that they might end up becoming, beauty is still in the eye of the beholder.

No matter which side of the fence you reside, it’s hard to deny that SEMA cars are fairly accurate representations of not only where the industry currently exists on a component by component basis, but also in which directions it is moving. Like it or not, these cars do inspire the trade and in turn set trends for the upcoming set of seasons. Furthermore, they remain above all else, just plain fun for everybody to point and look at. 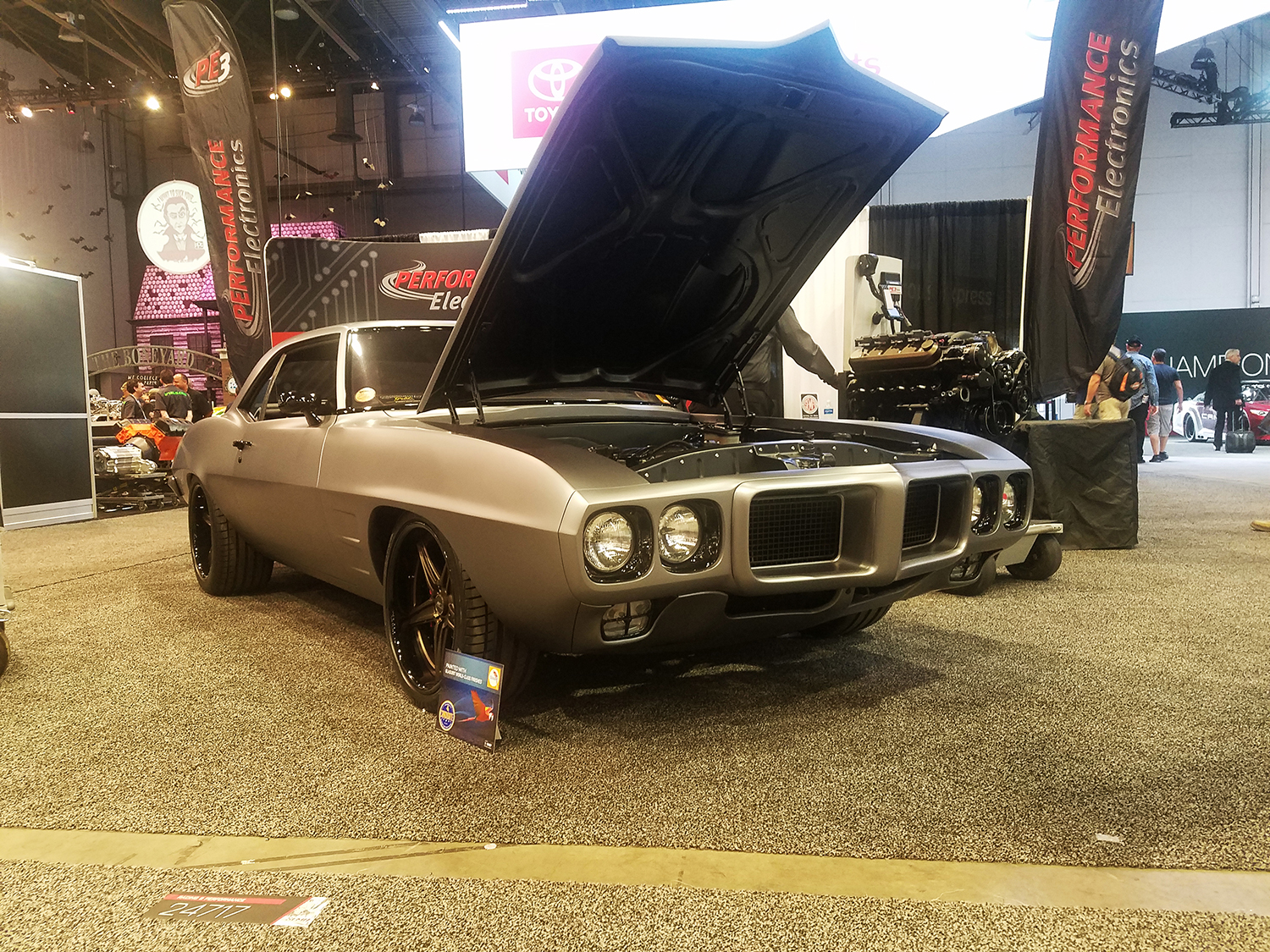 The popularity of wraps is hardly up for dispute at this point. They offer affordability, convenience and ease of maintaining resale, via protection of stock shades. But, this is SEMA! Sometimes practicality gets sacrificed in the name of accomplishment and this is demonstrated here. So, why forgo the benefits of practicality in this manner? Because its freaking cool, that’s why! I was also assured by the demonstrators/exhibitors that were waving this flag, that although there is still a tremendous degree of technique (and thus a showcase of skill) involved with creating a quality, flaw free satin finish, it is getting easier and more economical to perform. This is becoming evident in areas other than automotive as well. Seems like I can’t buy a pointy, heavy metal looking guitar (which, for some unknown reason I continue to maintain a collection of) that isn’tadorning a satin hue of one form or another (which I’m thoroughly not into). I would somewhat expect to see this become a low-level standard for the next few years, as the results are certainly striking, especially on Muscle Cars and Corvettes. 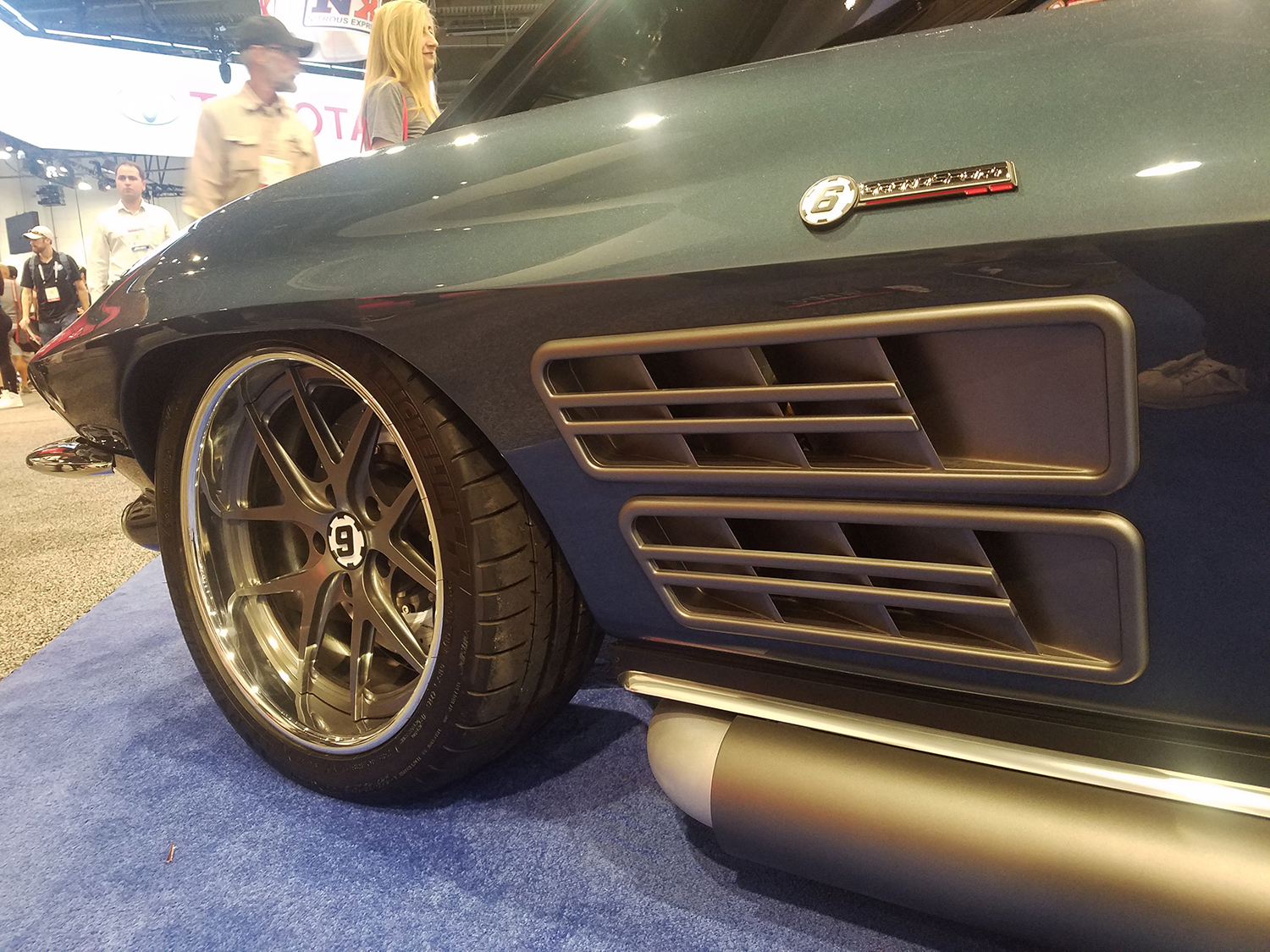 Whether it be exterior trim, interior components, the presentation of in car electronics, or the reproduction of impossible to source OEM type parts and accessories for concours restorations on hyper low production, thought to be previously extinct examples, the effects of 3D printing were on display nearly everywhere at SEMA 2017. As the processes and applications continue to become more affordable and more accessible, it certainly promises to open up new frontiers of design and creativity across every genre. I recall a few years ago (2014?), the awe and amazement of a crude cutout of a Local Motors race car between North and Central Halls and hearing the echos of what was coming and what could be. That time is here. Will these new-found superpowers become abused and create a new level of distasteful disasterdom? I think the jury is still out. As for now, this is one of the most exciting technological advances that our industry has seen in a long time. The sky’s the limit here! 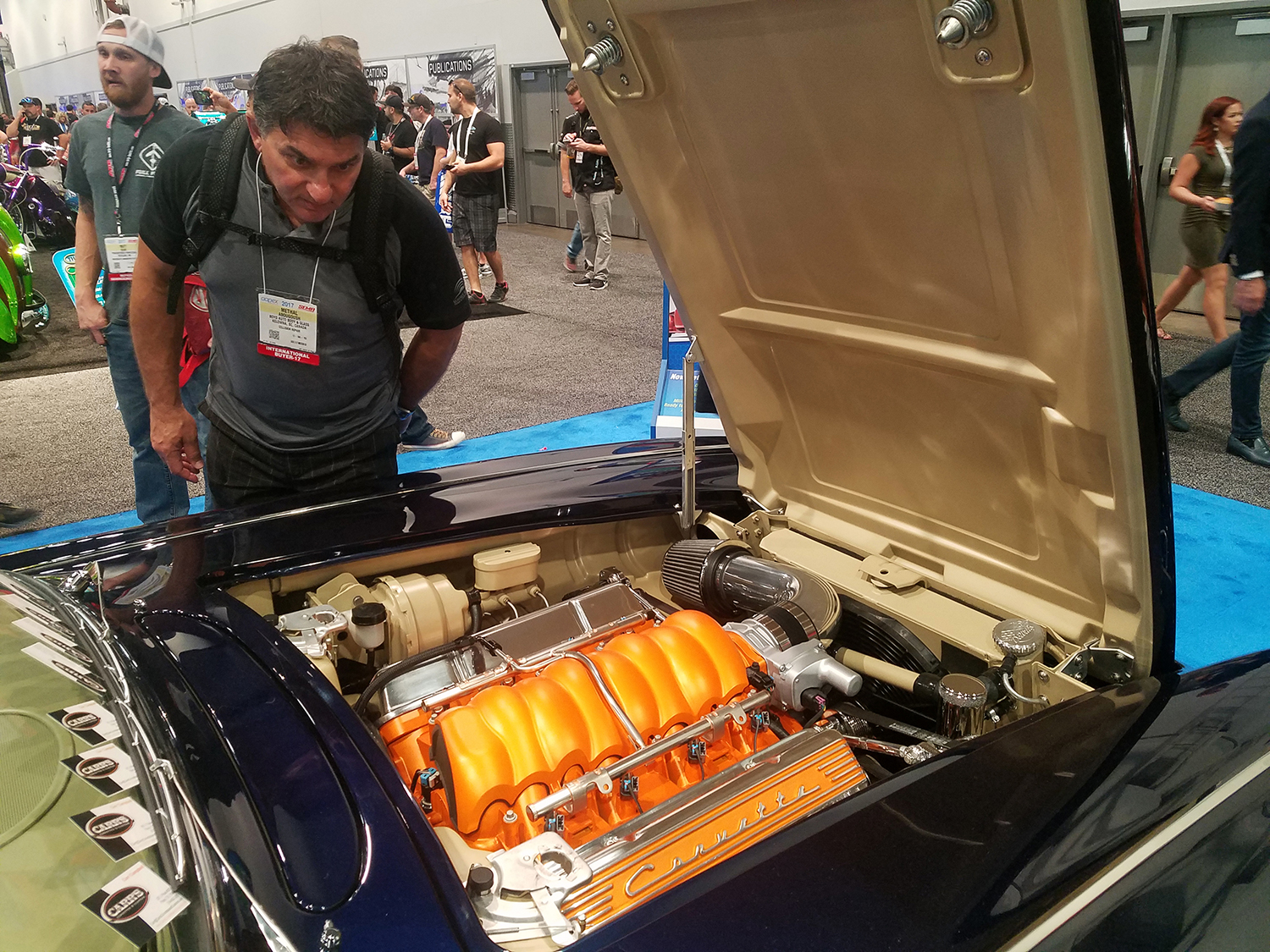 Painted engine bays are certainly nothing new. They have been showing up sporadically on Hotrods and Muscle Cars for quite a while and have been a staple of the Import Tuner community for nearly a decade. This year however, they seemed to somewhat become the standard on a large percentage of the highest-level builds. The best, most effective examples took the theme of the interior and carried it throughout and up on to the reverse side of the hood, creating a seamless flow that complimented the general composition of the car beautifully and demonstrated a cleanliness that was tasteful, yet creative. Satin paint was again seen here frequently and with stunning effect. 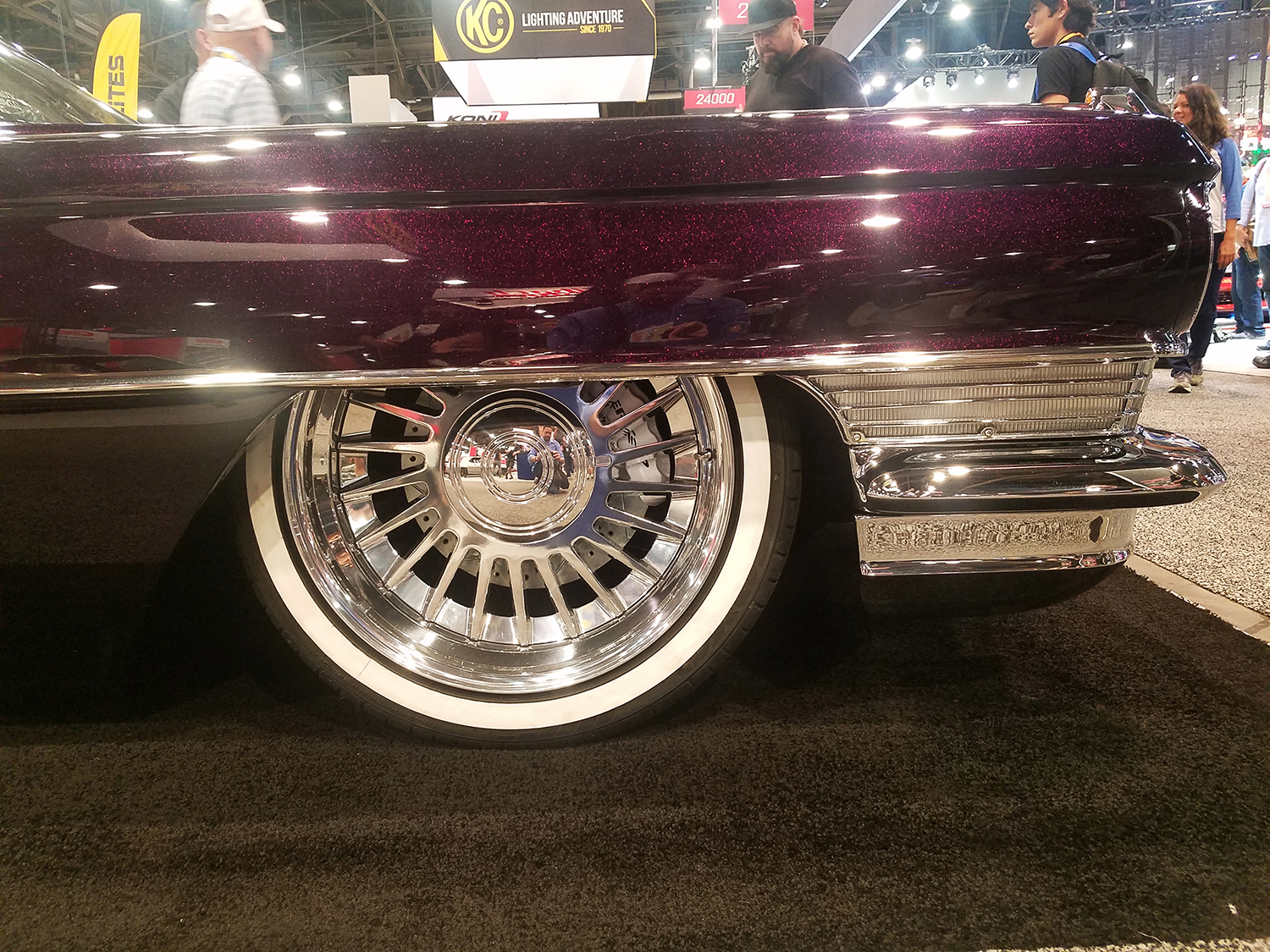 Let’s face it, one of the most loathsome things that the SEMA show traditionally represents, is good, well put together cars that are totally ruined by giant, gaudy, SUV sized wheels crapping all over what is an otherwise a killer build. Now, don’t get me wrong, a great set of factory looking five stars, Rallyes, period correct looking/reasonable sized Cragers, or for the Europeans, a clean set of Boranni wires adorned in chrome can be a fantastic addition, but the reality is that this has not been the norm for some time at SEMA. SEMA has garnered a reputation for outwardly obnoxious, oversized, (barely) rubber wrapped, costume jewelry store abominations, pure and simple. As I was walking around primarily Central Hall on day one this year, something seemed wonderfully absent. You guessed it: it was chrome rims. As the days went on and the miles went by, I continued to notice this throughout the show. Chrome seemed virtually absent from nearly every single high-level build at the show and I for one say good riddance. In its place seemed to be a lot of tasteful, polished finishes, which in my opinion tuck way better and allow the rest of the car to balance out much more effectively. This for me, was one of the most welcome trends of 2017 and I hope with every fiber of my being, that it’s here to stay. On a side note: (with the exception of Acura – which heaven help their shockingly clueless design team at this point) directionals also seem to continue to be dead, dead, dead. If SEMA is any indication (which it always is) there’s a lot to be hopeful for in the Wheelville. 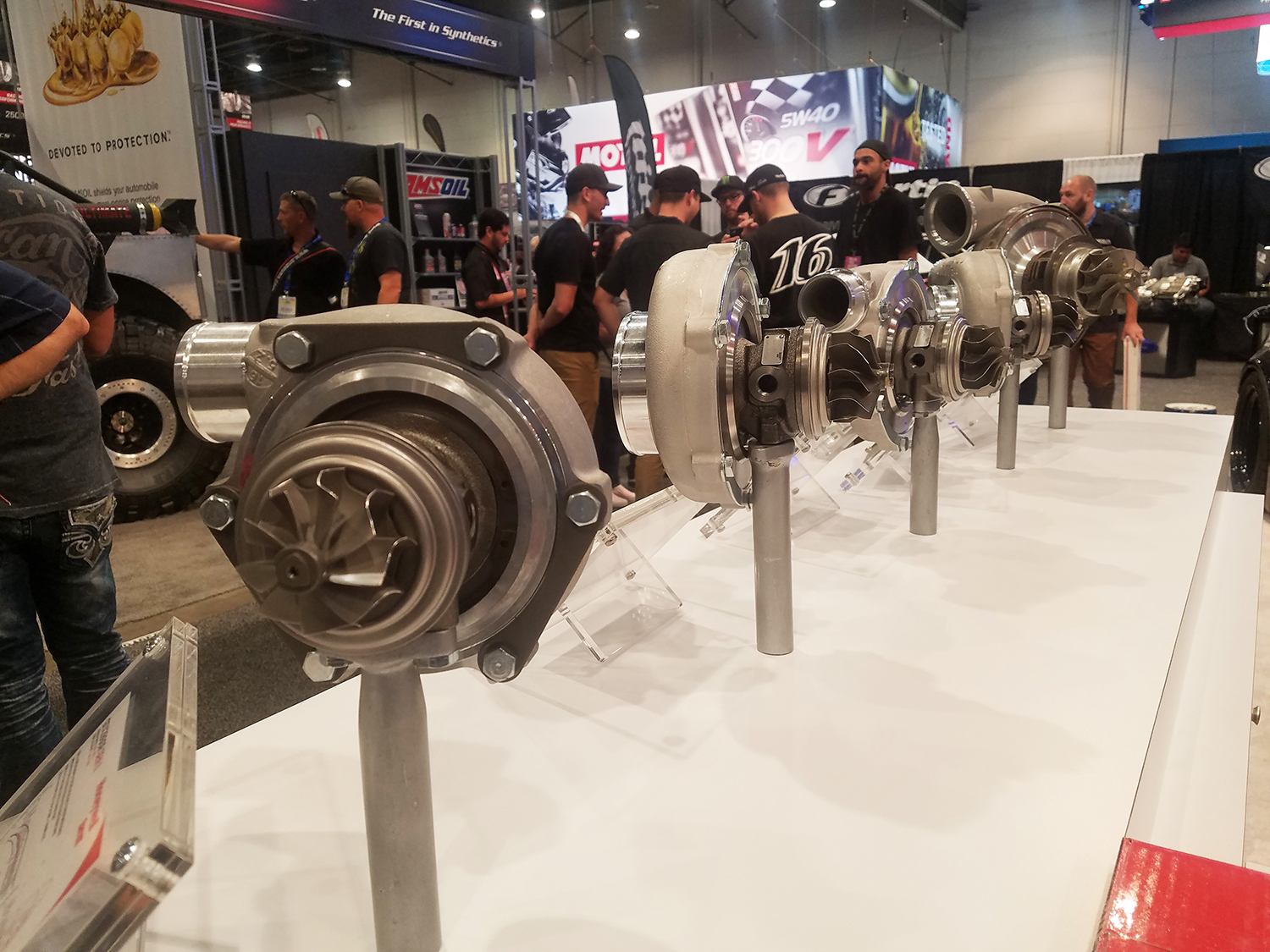 This one is seemingly a no brainer. OEM’s have unfortunately and thoroughly all but abandoned sweet, wonderful displacement in favor of the efficient, inexpensive power that turbos provide. It makes sense that the aftermarket would take notice and follow suit. As a result, it seemed like everywhere you looked this year there were turbos involved, and why not? The OEM’s are providing the pathway and foundation to innovate and the market is in turn providing the means to produce for a variety of new and existing manufacturers. Putting them on everything simply adds up. It breaks down to simple supply and demand, and as such, the market is speaking. This is the future boys and girls. We had better get used to it and take advantage of the opportunity. Clearly aftermarket manufacturers have got the memo and are making it happen. If you are feeling nostalgic, strap one to a big block and turn the earth backwards. It’s easier now than ever before. 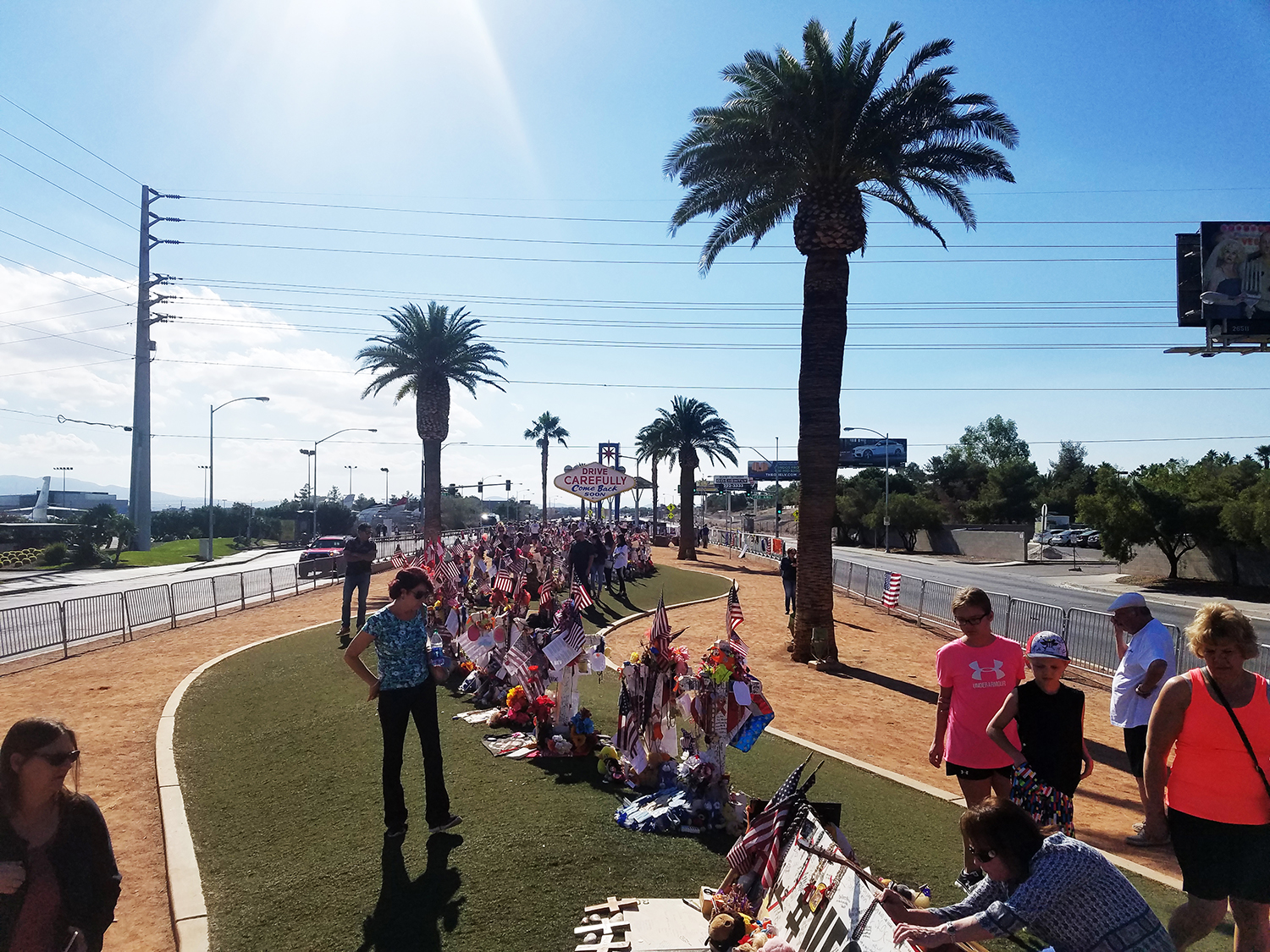 I started my morning of day three at SEMA by visiting the Las Vegas sign, which as you may or may not know, has become somewhat of a central tribute to the victims of the mass shooting at Mandalay Bay that occurred a few weeks back. It’s sort of easy to try and compartmentalize how many people 60 really is. But once you see it in person, the magnitude of what this guy did really hits you in the chest. The memorials simply went on and on, and on. It was absolutely heartbreaking to see the devastation that one person can cause, but what I walked away thinking about was the exact opposite. If one person can do so much that’s so awful, so quickly, think about how much good one person can do on a slow and steady basis in reverse? This was a tough pill to swallow, no question about it, but the reality remains, we can make a lot of impact in the other direction if we just put forth the effort. Moral of the story here is, don’t let your differences get in the way of how you approach people. No matter who you are, how you lean politically/religiously, etc, you will always have more in common to celebrate with somebody than oppose when considering the larger picture. Take a minute today to try and do something nice for somebody that you normally wouldn’t. Invest time, invest life, invest it all and reinvent yourself. Before you know it, your essence is renewed with something fresh. Your impact will be felt…… Think about it. 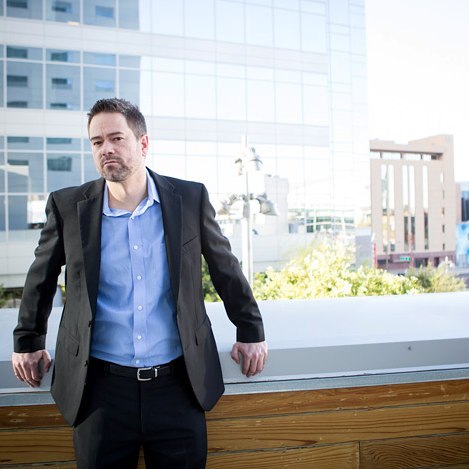 Darin Roberge is President and CEO of Motorwerks Marketing and is a Marketing and Media Consultant in the Specialty Automotive and Live Events industries. Darin has been named a Business Trendsetter by Arizona Foothills Magazine, is a two-time nominee to Phoenix Business Journal’s 40 Under 40 list and is one of Sports Car Market Magazine’s 40 Under 40 for 2017. Learn more about Darin at www.DarinRoberge.com